Drugs, Electroshock, and the Psychopharmaceutical Complex 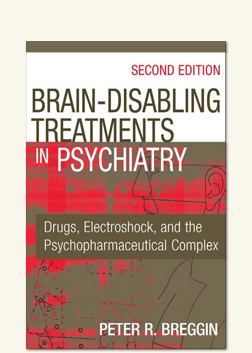 Many of Breggin's earlier findings have improved clinical practice, led to legal victories against drug companies, and resulted in FDA-mandated changes in what the manufacturers must admit about their drugs.

This greatly expanded second edition, supported by the latest evidence-based research, shows that psychiatric drugs achieve their primary or essential effect by causing brain dysfunction, and they tend to do far more harm than good.

New scientific analyses in this completely updated edition include:

"Dr. Breggin updates us on the real evidence with respect to the safety and effectiveness of the range of specific psychiatric medications and ECT. This information is needed by all mental health professionals, as well as patients and families."  --Bertram Karon, Ph.D., Professor of Psychology, Michigan State University.

"For those who have been following my work or who wish an introduction to my lifetime reform efforts and scientific investigations in the field of psychiatry, the newly published second edition of Brain-Disabling Treatments in Psychiatry: Drugs, Electroshock and the Psychopharmaceutical Complex (Springer Publishing Company, 2008) has recently been published. It is a thorough and up-to-date presentation of my overall critique of modern psychiatry, including the latest medications and treatments.

"The new edition describes general principles for the safe withdrawal from psychiatric drugs with specific examples of withdrawal problems related to each type of psychiatric medication, including antidepressants, tranquilizers, stimulants, mood stabilizers and neuroleptic (antipsychotic) drugs. For interested professionals, patients and clients, it presents guidelines for how to conduct psychotherapy and counseling without resort to psychiatric drugs, even for the most emotionally distressed people.

"The new edition of the book presents evidence confirming many of the first edition’s most controversial conclusions. Research continues to demonstrate that antidepressants are ineffective in treating depression and instead increase the risk of suicidality. As another example, additional studies have shown that stimulants offer no long-term positive effects on the behavior of children and that these drugs suppress growth and make children prone to cocaine abuse as young adults. Recent reports continue to confirm that electroshock causes permanent brain damage and cognitive dysfunction.

"The scientific premise of the book is that all psychiatric treatments—drugs, electroshock and lobotomy—have their 'therapeutic' impact by disabling the brain. They do not improve brain function or correct biochemical imbalances, they cause brain dysfunction and biochemical imbalances. These brain-disabling interventions are then considered effective when the doctor, family, patient or society views impaired brain dysfunction in the target individuals as a desirable or beneficial effect. Because psychiatric drugs in reality do more harm than good, the psychopharmaceutical complex must devote billions of dollars to exerting its power and influence in the political, professional and public arenas.

"'Antipsychotic' drugs such as Risperdal, Zyprexa, Seroquel and Geodon are used literally to chemically lobotomize millions of adults and children because the resulting apathy and indifference are seen as an improvement over their previously distressed and distressing state of mind or behavior. Millions more adults take 'tranquilizers' like Xanax, Ativan, Klonopin and Valium, suppressing their overall brain function in order to reduce feelings of anxiety. A large percentage of our nation’s children have their spontaneity reduced or even crushed by stimulant drugs such as Ritalin, Concerta, Adderall and Strattera, causing them to become more docile and more obsessively attentive to rote work.

"Despite all the propaganda, antidepressants such Prozac, Paxil, Zoloft and Cymbalta have no scientifically demonstrable effectiveness and are proven to cause suicidality, as well as violence and mania. They too 'work' by causing mental disabilities such as apathy and euphoria that are misinterpreted as improvements. Meanwhile, their continued widespread use is determined in part by the fact that withdrawal produces severe psychiatric symptoms, including anxiety and depression. In short, it is too difficult and painful for people to stop taking them.

"All psychiatric drugs have the potential to cause withdrawal reactions, including the antidepressants, stimulants, tranquilizers, antipsychotic drugs and 'mood stabilizers' such lithium. When the individual’s condition grows markedly worse within days or weeks of stopping the psychiatric drug, this is almost always due to a withdrawal reaction. However, misinformed doctors and misled parents, teachers and patients think that this is evidence that the individual 'needs' the drug even more, when in fact he or she needs time to recover from withdrawal effects.

"People commonly use alcohol, marijuana and other non-prescription drugs to dull their feelings. Usually they do not fool themselves into believing they are somehow improving the function of their minds and brains. Yet when people take psychiatric drugs, they almost always do so without realizing that the drugs “work” by disrupting brain function, that the drugs cause withdrawal effects, and that they frequently result in dangerous and destructive mental reactions and behaviors.

"Most consumers of psychiatric drugs do not realize how much these chemical agents disrupt the function of the brain and mind. As a result, their treatment in effect becomes involuntary. Many other adults are physically forced to these drugs in hospitals and even under outpatient commitment that allows for enforced drugging in the home. Because children cannot control their lives, or understand the implications of taking drugs, they are always involuntary participants in these brain-disabling treatments. Our society needs to stop forcing psychoactive drugs on its citizens, young and old.

"Electroshock provides a more obvious illustration of the brain-disabling effects of psychiatric treatment. Shock treatment is simply closed-head injury caused by an overwhelming current of electricity sufficient to cause a grand mal seizure. When the patient becomes apathetic, the doctor writes in the hospital chart, 'No longer complaining.' When the patient displays the euphoria commonly associated brain damage, the doctor writes, 'mood improved.' Meanwhile, the individual’s brain and mind are so drastically injured that he or she is rendered unable to protest. They are easily led to take repeated shock treatments. In many cases, family members must intervene to stop the destructive 'treatment.'

"The brain-disabling principle of psychiatric treatment is not a speculation. It is a solid scientific theory based on hundreds of evidence-based reports, clinical experience, and common sense observations. I believe it will stand the test of time."

"The new edition of Brain-Disabling Treatments in Psychiatry introduces the concept of medication spellbinding—the capacity of psychoactive drugs to blunt the individual’s appreciation of drug-induced mental dysfunction and, at times, to encourage a misperception that they are doing better than ever when they are, in fact, doing worse than ever. In the extreme, medication spellbinding drives individuals into bizarre, out-of-character destructive actions, including suicide and violence. Medication spellbinding is an aspect of the brain-disabling principle that explains why so many individuals take drugs of all kinds, from antidepressants to alcohol, when they are causing them great harm and even destroying their lives.

"The power of the psychopharmaceutical complex, a concept that I introduced in 1991 in Toxic Psychiatry, has now received confirmation from innumerable books by disenchanted members of the medical establishment. The new edition of Brain-Disabling Treatments in Psychiatry reviews some of these other books and articles, and presents details about how the drug companies continue to rule the world of psychiatry; they control research and journal publications, dominate medical education, collaborate with insurance companies and federal agencies, and finance organized psychiatry and medicine.

"This new edition of Brain-Disabling Treatments in Psychiatry has a long history, originating in the 1983 publication of Psychiatric Drugs: Hazards to the Brain and then evolving into the initial 1997 edition of Brain-Disabling Treatments in Psychiatry. The concepts and information—contained 16 detailed chapters and 85 pages of scientific bibliography—provide a mountain of information about what’s wrong with modern psychiatry and what’s needed to correct it."