Talking Back to Prozac

What Doctors Aren't Telling You About Prozac and the Newer Antidepressants 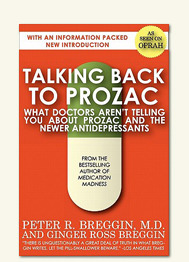 Authors Peter R Breggin MD and Ginger Breggin have re-released their seminal book Talking Back to Prozac: What Doctors Aren’t Telling You About Prozac and the Newer Antidepressants with a new introduction and new information about the SSRI antidepressants, including the granddaddy of them all—Prozac.

This is the Breggin book that blew the whistle on the skewed science of the “new” antidepressants, including Paxil, Prozac, Luvox, Zoloft, Celexa, Lexapro, Effexor, Cymbalta and Wellbutrin.

Here follows a portion of the new introduction to Talking Back to Prozac:

“How good is the science in this book? How valid and convincing is it—even to the drug companies that I am criticizing? I have now been a medical expert in dozens of product liability suits against pharmaceutical companies, including the manufacturers of drugs examined in this book: Prozac, Paxil and Zoloft. Most of the lawsuits have centered on the main issues in this book: antidepressant-induced violence, suicide and mania. In most of these cases, the plaintiffs or the plaintiffs’ families have hired me after individuals have committed suicide, perpetrated crimes, or otherwise ruined their lives while under the influence of an antidepressant.

“Most of the antidepressant cases in which I have been an expert have been settled to the satisfaction of the people who brought the suit against the drug company. Sometimes the drug companies have given a million, or even many millions of dollars, to the plaintiffs—of course, always without admitting guilt. Except for one case that was settled for millions of dollars during the trial, in no case has an antidepressant manufacturer chosen to go to court in a case in which I have been a medical expert. The reason, I believe, is that the science I have presented is solid and even incontrovertible. The drug companies don’t want the evidence coming out in open court and they don’t want to risk losing a high-profile case.

“As a result of my work as a medical expert against the drug companies, teams of opposing lawyers and opposing medical experts have scrutinized my medical opinions and this book in particular. This high-powered critical assault has been going on for years and it has turned up no errors in this book. None of the original book needs correction. It would be difficult to exaggerate how much financial investment and manpower the drug companies have devoted to examining Talking Back to Prozac without finding any scientific or factual errors.

“In addition to its unsullied record as a scientific work, Talking Back to Prozac remains worthwhile reading as a demonstration that objective analyses—i.e., analyses done by a scientist independent of the Psychopharmaceutical Complex—can come to clear conclusions years ahead of the medical establishment with its ties to the drug companies. Talking Back to Prozac continues to provide a model for how to go about examining the actual adverse effects and efficacy of psychiatric drugs, or the risk/benefit ratio. The rich detail in this book remains relevant and useful to a variety of researchers as well as to medical experts and attorneys involved in product liability litigation against pharmaceutical companies.

“If you were to read this book by itself, you would know more about the risks of the newer antidepressants than most physicians. Ideally, you should also read my two most recent books, Brain-Disabling Treatments in Psychiatry, the Second Edition (2008) and Medication Madness: A Psychiatrist Exposes the Dangers of Mood Altering Drugs (2008).

“This introduction is based on Chapter 6 of the second edition of Brain-Disabling Treatments in Psychiatry (2008) and examines the evolution of the drug labels for SSRI antidepressants including Prozac, Paxil and Zoloft. The evolution of the drug label allows an in-depth look at the FDA’s acknowledged hazards of the newer antidepressants. A more detailed analysis of the background scientific literature can be found in Chapter 7 of Brain-Disabling Treatments in Psychiatry (2008).

“My most recent book, Medication Madness: A Psychiatrist Exposes the Dangers of Mood-Altering Drugs (2008), presents dozens of new cases of individuals driven to take out-of-character and sometimes horrendously destructive actions while under the influence of the newer antidepressants. It introduces the concept of medication spellbinding which helps to explain how people fail to appreciate the negative emotional and psychological effects of psychoactive agents while they are taking them; how they can feel better than ever when they are in reality doing worse than ever; and how they will sometimes commit harmful actions that they would never have perpetrated except for the spellbinding drug effect.

“In recent years, the market for antidepressants has become huge. In the United States in 2001, an estimated 24.5 million patient visits were made for depression, with 69% of these visits resulting in prescriptions for SSRIs (Fergusson et al., 2005; Stafford et al., 2001). In 2002, about 6% of all boys were taking antidepressants, and the number has continued to grow. By 2004, an estimated 1 in 10 women was taking one of the newer antidepressants (Vedantam, 2004).

“The antidepressants generate gigantic revenues for the drug companies. In 2006, according to IMS Health (2007), antidepressants were the most prescribed among all classes of drugs, with a total of 227.3 million prescriptions in the United States. They were third in revenue, with a total of $13.5 billion. To give perspective to these ﬁgures, the widely prescribed lipid regulators like Lipitor were second as a class, with 203.0 million prescriptions, and ﬁrst in revenue, at $21.6 billion.

"Antidepressants have, however, been taking something of a licking from the Food and Drug Administration (FDA) and the media in the last few years, culminating in 2004—2005 with a black-box warning about antidepressant-induced suicidality in children and then in 2007 by another black-box warning about increased suicidality in young adults. But in reality, there was little impact on the prescription of these drugs. U.S. sales of antidepressants declined 1.4% in 2004 and 6% in 2005, followed by a 2% recovery in 2006, with industry determining that the black-box warnings were ultimately “unlikely to signiﬁcantly threaten sales” (McManus, 2007). And as already mentioned, they are still number one when it comes to sales.

The FDA Begins to Catch Up with Talking Back to Prozac

“In 2004 the FDA began issuing a series of label changes and public health warnings for the newer antidepressants that have confirmed the most important conclusions drawn ten years earlier in Talking Back to Prozac. The FDA now requires extensive warnings in the labels for antidepressants describing most of the problems first documented in detail in this book, including the increased risk of suicidality, and the over-stimulation or activation syndrome with irritability, aggression, hostility, mood instability, hypomania and mania. The FDA has also acknowledged that the drugs are ineffective in children and further research has confirmed that they lack efficacy in adults as well, once again confirming observations made years earlier in this book.

Read the whole story in this timely and fascinating examination of both the science and the politics of Big Pharma and the psychiatric industry—what Dr. Peter Breggin calls the Psychopharmaceutical Complex.

A review of Talking Back to Prozac, published in Psychology Today, July 1994.