The Elite Strikes Back Against Trump’s Populist Drug

On May 16, 2020, the esteemed British medical journal, Lancet, attacked Donald Trump and urged us Americans to elect a different president for 2021. Here is the concluding paragraph of its Editorial:

The Trump administration’s further erosion of the CDC will harm global cooperation in science and public health, as it is trying to do by defunding WHO. A strong CDC is needed to respond to public health threats, both domestic and international, and to help prevent the next inevitable pandemic. Americans must put a president in the White House come January, 2021, who will understand that public health should not be guided by partisan politics. The Lancet

The Lancet wants Trump to be non-partisan, meaning partisan to the Lancet’s elite globalist politics. At the same time, the Lancet itself takes a remarkably partisan position for a “scientific” journal—truly interfering with America’s elections—while claiming that Trump should stop being so partisan. Can so-called science get more political than that?

Never mind that the CDC was drastically unprepared for COVID-19 and Trump had to set up a committee to do its work. Never mind our testing for SAR-Cov-2, which was originally the responsibility of the CDC, had to be taken over by Trump himself to get it rolling.

And as for WHO, instead of damning them for their disastrous obedience to the Chinese Communist regime, Lancet blames Trump for punishing WHO. They say not a word about WHO teaming up with the totalitarians who caused the epidemic in order to hide its virulence from the unsuspecting world, resulting in untold numbers of deaths.

We all know what happens when medical people start blaming Trump. Then they go after “Trump’s drug,” hydroxychloroquine. It is practically formulaic. Go after Trump, go after his drug!

The Lancet’s multinational study came out of the heart of the Boston medical establishment, Brigham and Women’s Hospital and Harvard Medical School. In my experience evaluating decades of research in the field of neurosurgery and psychiatry, Harvard was always the worst. When I went to Harvard’s Massachusetts Mental Health Center for my first year of residency in psychiatry in 1963-1964, I expected to find one of the nation’s most psychologically sophisticated programs, much as I had found it the year before when interviewing for the position. Instead, within the space of a year, the Harvard program had converted to drug management as its central practice. When I challenged this overnight conversion, I was told that the future of psychiatry lay in computer diagnosis and drug treatment. Harvard had gone into collaboration with the burgeoning Drug Empire.

A decade later, when I conducted a successful campaign against the worldwide return of psychosurgery and lobotomy (psychiatric brain mutilation), the leadership that I had to fight and vanquish originated from Harvard. The director of Harvard’s Department of Neurosurgery at the Mass General, William Sweet, was advocating brain mutilation to cure the black leaders of the urban uprising that were afflicting America’s cities.

In medicine and psychiatry, the highest levels are commonly the morally and politically lowest levels, the most abjectly corrupt. It is truly as Lord Acton said, “Power tends to corrupt, and absolute power corrupts absolutely.”

The Lancet study was advertised as showing “decreased in-house survival and an increased frequency of ventricular arrhythmias when used for the treatment of COVID-19.” The study made the same claims and had the same errors as the VA study which we were perhaps the first to discredit.

When trying to determine if a drug is causing a problem in the treatment of a potentially fatal disease, it is important to have a control of similar patients against which to compare the death rate. For example, if 2 in 10 people die when given drug X for disease Y, we cannot say that drug X is dangerous. Perhaps 3 or 4 in 10 people would have died without the drug. This is one of the errors in the VA study and now in the Lancet study.

In this study, what kind of group can we compare hydroxychloroquine to? When I heard the study touted on network radio was containing 96,032 patients, I was impressed. My impression faded when I found out that 81,144 were in the so-called control group and only 3,016 were in the hydroxychloroquine group. At first glance, it would seem impossible—despite all kinds of statistical manipulations—to compare a group of 81,144 patients without any drug treatment to a much tighter knit group of people being given the seemingly controversial hydroxychloroquine which would have been reserved for the worst cases. Surely, the relatively small group of hydroxychloroquine patients would have some unique characteristics not shared by the huge control group. And of course, they did. The smaller hydroxychloroquine group compared to the non-drug group had to have been much sicker or they would not have been given the drug, and hence they had to be more likely to die with or without treatment.

Let me make this simple. No amount of statistical malarkey can change the fact that a gigantic control of people with COVID-19 who have not been given any medication can possibly be a genuine control group. The patients in the drug-free group are not going to be as sick as a small, focused treatment group being given a medicine that many elite American doctors consider controversial because Donald Trump supports it and the Pharmaceutical Empire reviles it.

In some ways, I need not have bothered with my somewhat lengthy analysis of the study’s inability to come to meaningful conclusions, because toward the end, the authors admit it, buried in the middle of a paragraph on page 8 of 10. After trying to justify the flawed design, they confess, “Nevertheless, a cause-and-effect relationship between drug therapy and survival should not be inferred.” What!? 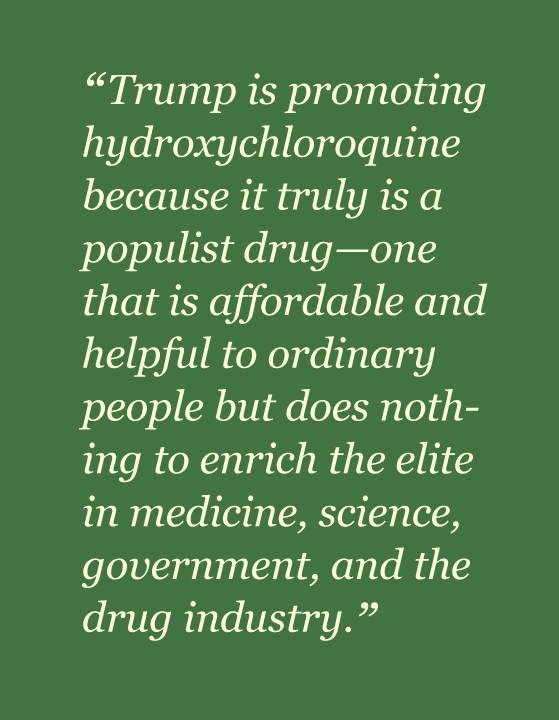 The authors are literally saying they have no basis for claiming that the drug was actually the cause of the increased deaths. We are told not to even “infer” such a conclusion. Then why did they list this finding as a matter of fact in their summary at the start of their article, which is all that most people ever read?

Why did Lancet permit this farce, resulting in fake news headlines around the world, leading doctors to withhold the drug and causing researchers to stop hydroxychloroquine studies for fear of killing patients?

Who put a “temporary” stop to hydroxychloroquine research based on the fake Lancet study? The World Health Organization (WHO), the very group the Lancet editorial was trying to protect from defunding by Trump. How long did WHO wait? The study came out on a Friday and WHO acted on the Saturday. Wow, that’s close coordination. We take this as more evidence that Trump needs to clamp down on WHO.

To add to the presumption of bias on the Lancet study’s part, the authors mention that there were many patients taking remdesivir, but they were not included. Why? I do not think it is a wild speculation to suggest that, in a similar fashion to Anthony Fauci’s aborted NIH remdesivir study, it was not turning out so well for the establishment’s drug.

To return to the beginning, on May 16, 2020, the globalist British journal Lancet tells Americans not to elect Trump in 2021 and then on May 22, 2020 it publishes a bizarre self-immolating fake study alleged to prove the dangerousness of “Trump’s drug” hydroxychloroquine. Be prepared for more of this.

The drug and vaccine companies, and their medical lackeys, hate hydroxychloroquine not only because Trump promotes its and was even taking it as a preventive. Trump is promoting hydroxychloroquine because it truly is a populist drug—one that is affordable and helpful to ordinary people but does nothing to enrich the elite in medicine, science, government, and the drug industry.