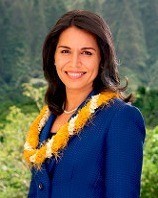 Tulsi Gabbard, grew up in beautiful Hawaiâi. As a teenager, she co-founded an environmental non-profit called Healthy Hawaiâi Coalition, focused on educating children about protecting Hawaiiâs environment. An advocate for environmental policy, Tulsi was elected to the Hawaiâi State Legislature in 2002 when she was just 21 years old, becoming the youngest person ever elected in the state. A year later, she joined the Hawaiâi Army National Guard to serve Hawaiâi and our country. In 2004, Tulsi volunteered to deploy with her fellow soldiers, becoming the first state official to voluntarily step down from public office to serve in a war zone. Tulsi served two tours of duty in the Middle East, and she continues her service as a Major in the Army National Guard. She was awarded the Meritorious Service Medal at the end of this tour. In between her two tours, Tulsi served in the U.S. Senate as a legislative aide to Senator Daniel Akaka (D-HI), where she advised him on energy independence, homeland security, the environment, and veteran issues. While working for Senator Akaka in 2007, Tulsi graduated from the Accelerated Officer Candidate School at the Alabama Military Academy, where she was the first woman to finish as the distinguished honor graduate in the Academy's 50-year history. Tulsi was commissioned as a Second Lieutenant and again assigned to the 29th Brigade Special Troops Battalion of the HawaiÊ»i Army National Guardâthis time to serve as the Military Police Platoon Leader. In 2010, Tulsi was elected to the Honolulu City Council, serving as Chair of the Safety, Economic Development, and Government Affairs Committee and Vice Chair of the Budget Committee. Tulsi was elected in 2012 to the United States House of Representatives, serving Hawaiiâs 2nd District. She is one of the first two female combat veterans to ever serve in the U.S. Congress, and also its first and only Hindu member. Tulsi also serves on the House Armed Services Committee and House Foreign Affairs Committee where she is a strong advocate for veterans, our service members, and making smart strategic decisions that best secure our nation. Tulsi is working every day to make sure we have a sustainable economy that works for all families, with access to affordable health care, good jobs, and a quality education.