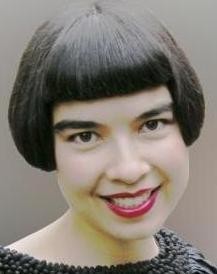 Technology Artist Drue Kataoka is known for creating interactive and engaging artworks with significant social impact using cutting edge technologies like virtual reality, brainwaves (EEG), and mobile platforms. Drueâs painting Up! has been featured in the first zero gravity art exhibit at the International Space Station. Drue is sought after for her intricate mirror-polished steel sculptures, cast with ancient metal-working techniques, and shaped with free form organic expression only recently made possible with virtual reality. Drueâs piece â400,000 Is Not a Numberâ helped shine a light on the backlog of 400,000 untested rape kits waiting for justice, and her âTouch Our Futureâ digital tapestry drew the attention & participation of dozens of Nobel Laureates and heads of state to help reduce infant mortality. Only 24 hours after its creation, Drueâs portrait of British M.P. and humanitarian Jo Cox flooded social media, newswires and TV. Drueâs posters were carried by tens of thousands of people in Trafalgar Square, Batley, Dublin, Buenos Aires, New York, Washington DC, and many other cities, as a symbol of our shared humanity. Named a Young Global Leader & Cultural Leader of the World Economic Forum (WEF), Drue was invited to give a solo exhibition at the WEF in Davos. Drue was also a featured speaker at the WEF Annual Meeting in Davos in 2011, 2012, 2013, and 2016. Celebrating American women's "firsts," Drueâs iconic image Now Is The Time was launched around the Hillary Clinton Presidential Campaign. The only artwork officially unveiled at the 2016 Democratic National Convention. Recent work has been featured on CNN, Returs, The Wall Street Journal, MSNBC, CNBC, CBS and ABC, and in Stanford Magazine, the San Francisco Chronicle, the San Jose Mercury News and others. Graduate of Stanford University. Reacipient of the Martin Luther King, Jr. Research & Education Institute Award for her extensive community service along with Secretary George Shultz.